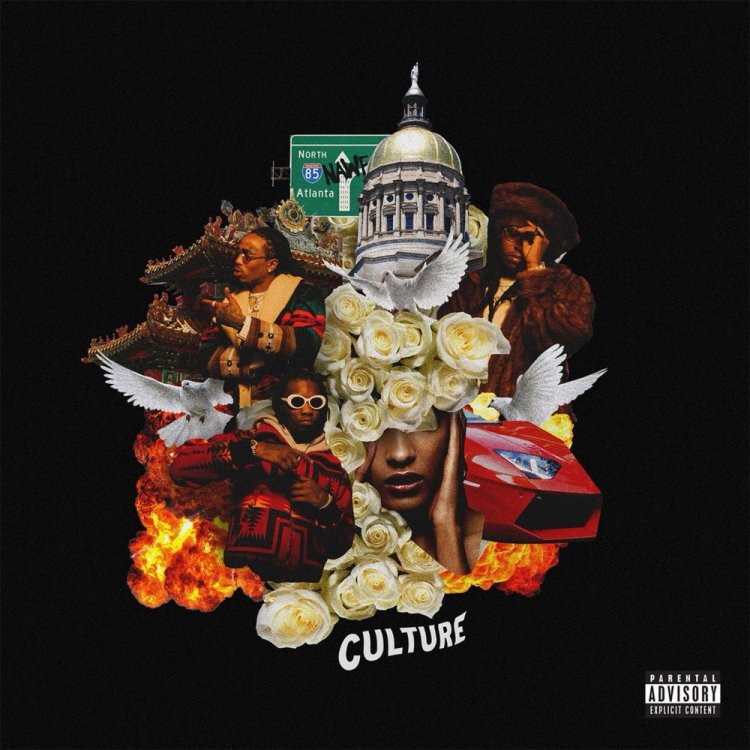 “Raindrop, drop top (drop top)
Smokin’ on cookie in the hotbox (cookie)
Fuckin’ on your bitch she a thot, thot (thot)
Cookin’ up dope in the crockpot (pot)
We came from nothin’ to somethin’ nigga (hey)
I don’t trust nobody grip the trigger (nobody)
Call up the gang, and they come and get you (gang)
Cry me a river, give you a tissue (hey)
My bitch is bad and boujee (bad)
Cookin’ up dope with an Uzi (blaow)
My niggas is savage, ruthless (savage)
We got 30’s and 100 rounds too (grrah)”

Culture shows some serious improvement from the “Nawf” Atlanta trio’s debut album, 2015’s Yung Rich Nation. Since their breakthrough from the releasing of  the oh so popular ,still to this day that one song that comes on during a pregame, frat party or whiles in the club  that’ll have you losing your mind and ready to turn the f%ck up ,  “Versace,” and the Y.R.N. (Young Rich Niggas) mixtape they’ve been one of the most influential acts in hip-hop.Their most obvious mark on the culture has been the tight, triplet-laced flow they resurrected and if you ask, its something they have definitely perfected. Migos also did us a solid and brought us the “Dab”, Dab of Ranch Snacks, and injected a handful of slang terms into the syntaxes of aspiring rappers from all over the nation. The Migos have suffered through their fair share of legal hang-ups and incarcerations in the past, which then  followed some creative dry spells where they were just firing shots at everyone in the industry that were biting their styles. This time around though they have themselves a #1 Hit record, Bad and Boujee, and I am pretty damn sure that they want to stick at the top of the commercial music pyramid from here on out.

As I listed above, my favorite tracks on Culture are Culture, T-Shirt, Bad and Boujee, Get Right Witcha, Out the Way and Kelly Price. I mean how could you not like Bad and Boujee? Same thing goes for T-Shirt which is beyond catchy, so catchy I caught my “momma” trying sing the lyrics the other day…strange I know. Kelly Price though might be my favorite song after Bad and Boujee. My guy Zaatar and I were talking and we peeped the tracklist for Culture the night before and we knew that It’d be our favorite song. We should already know that Quavo and Travis Scott mesh very well together, so with all of Migos in the equation why would it be different?

As for the other tracks they were alright I suppose. Nothing special to me honestly but they could easily be favorite tracks by others. I didn’t list this as one of my favorite tracks but, “Slippery “is dope and it’s actually starting to grow on me honestly. None of the other tracks are bad, I just don’t care for them. BUT!!  “Deadz” was absolutely terrible if you ask me, but its okay to have on in the background whiles pregaming  before a night out or before you’re getting ready to hit the gym.

“Out Yo Way” was a really dope track because its  an ode to the women that go the extra mile to take care of Quavo, Offset, and Takeoff, which is a theme their music does not really revolve around. You know? Seems necessary though that the ladies get a song for themselves since the female Migos following is surprisingly enormous! Many hip-hop fans had written  off Migos as one hit wonder status or a “fad” at one point, a fate similar to that of  my guys , Travis Porter . (I still remain a fan though)

Lyrically Culture is a hit and miss but what are you to expect when the hottest record in the country starts with “raindrop, droptop.”  Bad and Boujee is still absolute fire but lets face it, we listen to Migos to hear Quavo and company tell us about trappin/plug meetings over very hard  trap beats that  we love to hear and for the party atmosphere their music brings. On top of what the Migos bring, these days we are fans of hearing  music  that revolves around designer things, girls, money and getting lit whiles unifying the human race (kinda sorta). This is what they are known for doing, It’s part of “Migos Culture” and that “culture” is well represented through out “Culture.” (That was cheesy as hell, I know)

Jawaharlal Nehru once said, “Culture is the widening of the mind and spirit.” “Migos Culture” is wide spreading and its not going to slow down anytime soon. Quavo Huncho is my spirit animal and may “Culture” help you find yours.

Thanks for reading! ALSO, Thanks to all that are supporting me, giving me advice, and  for not blocking me or unfollowing me on Twitter when I’m promoting my blog like 30 times a day! Also, S/O to the bros Reuben and KB for letting me pick their brains some when I had writers block! Love y’all.

NEXT REVIEW WILL BE SAMPHA’S “PROCESS” ALBUM