Look, let me just get this out of the way. I don’t give a damn about no Anthony Joshua. Sure, he is the Heavyweight division’s cash cow and top ranked fighter. But he is far from the perfect champ, far. The two best heavyweights in the division are squaring off on Saturday. You’ll see.

This Saturday boxing is back again with another spectacular fight (I told y’all boxing is hot right now). Deontay “The Bronze Bomber” Wilder will be squaring off against the cheeky, “Gypsy King”, Tyson Fury. Alabama country boy (Roll Tide!) against the loud mouth Brit (God Save the Queen!). Most people will say this fight has exhausted it’s due date, I’ll tell you why they are wrong. 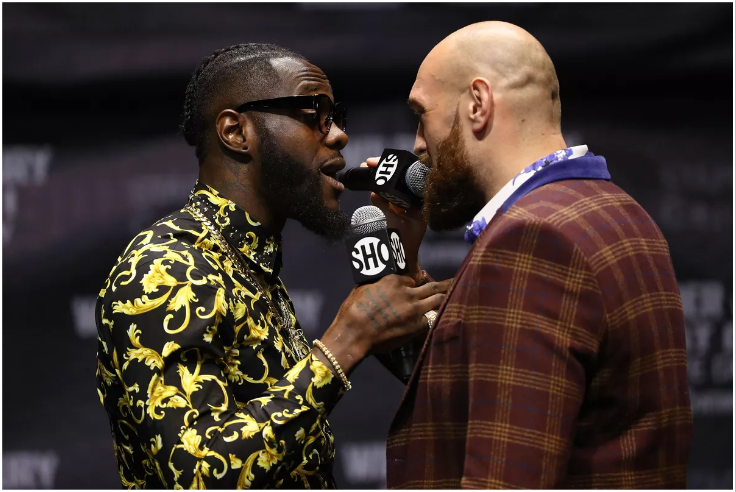 See, it’s been three years since Tyson Fury dethroned the Heavyweight King, Wladimir Klitschko. Post fight, the boxing pundits immediately began debating and clamoring for Fury vs. Joshua, or Fury vs. Wilder. We have known for years that Heavyweight supremacy would come down to a gauntlet of fights involving the trio of Tyson Fury, Anthony Joshua, and Deontay Wilder. We are still waiting for those gauntlet of fights.

In 2015, Fury would have been the overwhelming favorite to beat Wilder. However, going into the fight this Saturday, Wilder will be a 3/2 favorite. What changed?

2015 saw Deontay Wilder finally joining the ranks of the upper echelon. He was very green in experience, and somewhat untested. Essentially, Wilder was a walking windmill. Since 2015 he has been collecting BODIES. Like, he has voiced out his own mouth that he hopes to kill a man in the ring (what kind of black Ivan Drago ish…). Wilder finally has the names on his resume to match and back up his bravado. His body count includes: Stiverne, Molina, Szpilka, Arreola, Washington, and earlier this year, Luis Ortiz. Deontay has withstood being outskilled, outworked, and has shown a strong chin as well.

2015 saw Fury as the recognized Lineal Heavyweight champion. A year later he was a dumpster fire. Tyson Fury went through an extended battle with mental complications. Troubled by depression and anxiety, Fury followed up his dominant performance against Klitschko by indulging in cocaine and binge drinking [inserts Stephen A Smith Smith “WHO WAS ON CRACK” video]. In his slump, he tacked on another 7 or 8 stones, almost tipping the scales at 400 pounds. Fury, once a man of banter, had become the joke of boxing.

Check out my guy now though. Fury looks to be in the best shape he has ever been. Although his level of opposition has been weak, over the course of the last year Fury has regained his stature and impressed in the ring. Tyson has slowly got back to peak weight, and surely his boxing skills are still in tact. Fury is a pure boxer. For such a large human, his footwork rivals a Dancing with the Stars contestant. He is slick and agile, with proper speed. Where the heavyweight division is notorious for sluggers with minimal technical skills, Tyson Fury is a standout for his excellent use of the jab and angles.

His opponent couldn’t be anymore of an opposite. Deontay Wilder is cringe personified to most boxing purists. Wilder’s footwork, atrocious. Wilder’s technique looks like the guy at the gym, you know the guy… the guy who hits the punching bag and grunts while you are trying to finish your third set of cleans. Ok, he is not that bad. But Wilder makes one thing look pretty though, a knockout. Wilder has knocked out every single opponent he has ever faced. That’s 39 people if you aren’t hip. His 2017 first round knockout of Bermane Stiverne, is a literal meme. If anything makes you want to tune into this fight, let it be the high percentage of seeing a KO and some trash talk.

Styles make fights though. Wilder is no Mike Tyson. Whereas Iron Mike would stalk his opponent and come forward, Wilder is comfortable laying back and countering off the jab. Deontay is extremely patient in working to set up his big shot. Tyson Fury likes to extend range, and use his jab to set up the right hand. Fury often switches between Orthodox and Southpaw to disrupt his opponents rhythm. Neither fighter will be anxious to come forward. So it will be very interesting to see just who will be pushing the pace and action. Neither will give much attention to the body. But body work may be the key differentiator in the end. How will Wilder handle being the less skilled boxer and smaller man for once? Will Fury be able to stand up to the power and speed that Deontay presents?

We watched Wilder struggle with guys who have boxing competence before. Bermane Stiverne had a few bright moments in their first encounter. Wilder was down on the cards to Artur Szpilka before putting him to sleep. Luis Ortiz, arguably the most skilled heavyweight of this generation, had a lot of strong moments and almost had Deontay out cold on his feet. But Wilder proved resilient, and showed dominance in each fight. He uses his jab, he has shown to be proficient on defense, he mixes angles, and he sets traps. Kill the narrative that he can’t box and he is not skilled, Wilder is just unorthodox.

We have seen Fury hit the canvas. Steve Cunningham brought the Philly bull out and was able to put up a valiant effort early against Tyson Fury. Cunningham put Fury on his butt and had a young Jammy thinking we were going to see a historic upset. And then Fury got up. Fury dominated his way to a stoppage. Tyson has battled depression, alcoholism, drug abuse, and weight issues. He fell from stardom. And then he got up. The mere fact he is back in a championship fight is a win alone.

They are as much alike as they are different. These guys are giants. Fury stands 6’9, while Deontay is a modest 6’7. These guys are both arrogant. Deontay flexes his prowess over a country mumble, whenever he sees a mic. Tyson really believes he is a gift from God and that we should be honored by his presence. Their biggest shared trait: they both want to beat Anthony Joshua’s ass. In fact, Joshua’s refusal to fight either, made this fight happen. Thanks AJ!

Winner will be able to bring a strong case for a 50/50 split on terms at the negotiation table against Anthony Joshua. Whereas AJ would not come stateside, Fury has stepped up to challenge Deontay on his home turf. Whereas Joshua only offered Wilder $12 million for the biggest fight the division, the Fury bout will garner Wilder $14 million. A win for Tyson Fury would mean he is officially back. Being the man to dethrone Klitschko and the first to beat Wilder, would give Tyson major clout in the Pound for Pound talks. Wilder once again wants to prove that his boxing ability is grossly underestimated. A win over Fury, combined with his total resume, would lend support to the to the minority opinion that he can box and bang with the best. You can catch this fight on Pay Per View or if you are cheap like me, check out Fathom Events to see this fight in a movie theater near you. But just do me a favor and watch the damn fight.